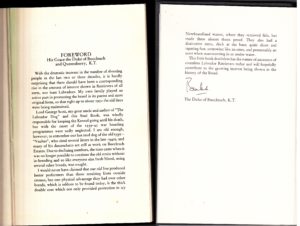 FOREWORD His Grace the Duke of Buccleuch and Queensberry, K.T.

With the dramatic increase in the number of shooting people in the last two or three decades, it is hardly surprising that there should have been a corresponding rise in the amount of interest shown in Retrievers of all sorts, not least Labradors. My own family played an active part in promoting the breed in its purest and most original form, so that right up to about 1950 the old lines were being maintained. Lord George Scott, my great uncle and author of “The Labrador Dog” and this Stud Book, was wholly responsible for keeping the Kennel going until his death, but with the onset of the 1939-45 war breeding programmes were sadly neglected. I am old enough, however, to remember our last stud dog of the old type —”Vaulter”, who sired several litters in the late 1940s, and many of his descendants are still at work on Buccleuch Estates. Due to declining numbers, the time came when it was no longer possible to continue the old strain without in-breeding and so like everyone else fresh blood, using several other breeds, was sought. I would never have claimed that our old line produced better performers than those resulting from outside crosses, but one physical advantage they had over other breeds, which is seldom to be found today, is the thick double coat which not only provided protection in icy Newfoundland waters, where they retrieved fish, but made them almost thorn proof. They also had a distinctive stern, thick at the base, quite short and tapering fast, somewhat like an otter, and presumably an asset when manoeuvring in or under water.

This little book doubtless has the names of ancestors of countless Labrador Retrievers today and will hopefully contribute to the growing interest being shown in the history of the Breed.

The Duke of Buccleuch, K.T. 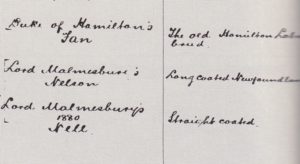 NOTES ON THE
DUKE OF BUCCLEUCH’S LABRADORS.
§§§
IT is only comparatively recently that, owing to the development of Dog Shows, various breeds of dogs now recognised in Great Britain have become standardised.
The recognised types of the modern breeds of retrievers are largely due to this influence.
When organised shooting (in particular driving of pheasants, grouse and partridges) became the custom, retrievers gradually superseded pointers and setters; but in earlier days a retriever was simply known as a “retriever,” and nothing else. Owners freely interbred short-coated, long-coated, and curly retrievers.
It was rare for different stamps to be kept pure ; and hardly any attempt was made to establish a breed of a partcular type, or to keep a pedigree.
Many dogs were imported from Newfoundland before the middle of the last century. Some were called Labradors, and their owners considered them vastly superior as retrievers to any other breed.
Amongst those who imported them were the 5th Duke of Buc­cleuch, his brother, Lord John Scott, the Earls of Home and Malmesbury, and Mr Radclyffe of Hyde, Wareham, Dorset.
Lords Ashburnham, Saltoun,AWimborne, Sir Frederick Graham of Netherby, the Duke of Hamilton, Sir Wilfred Lawson and others owned Labradors during the last century.
About 1825 or 1830, there was a very considerable trade between Poole Harbour and Newfoundland, which was continued until near the end of the 19th century. The 2nd Earl of Malmesbury (1778-1841) freely imported Labradors to Heron Court, and kept the breed up till his death. The 3rd Earl (1807-1889) continued to import and breed them. In a letter written to the 6th Duke of Buccleuch about 1887 he said, “We always call mine Labrador dogs “and I have kept the breed as pure as I could from the first I had “from Poole, at that time carrying on a brisk trade with New­”foundland. The real breed may be known by their having a close “coat which turns the water off like oil and, above all, a tail like an “otter.”

It is on record that the 5th Duke of Buccleuch in 1839 took his Labrador, “Moss,” in his yacht out to Naples. Lord Home, who was with him, took out his Labrador, “Drake.”
Colonel Hawker in 1830, referring to the Newfoundland and Labrador retrievers, mentions the ordinary Newfoundland dog—”which is very large, strong of limb, rough-haired and carries his “tail high.” Referring to the other kind, “by far the best for any “kind of shooting,” he says that “he is generally black and no “bigger than a pointer, very fine in legs, with short smooth hair and “does not carry his tail so much curled as the other ; is extremely “quick, running, swimming and fighting.” He adds that “the St. “John’s breed was chiefly used on the native coast by fishermen. “Their sense of smell is hardly to be credited : in finding wounded “game there is not a living equal in the canine race.”
Colonel Hawker says they were “formerly numerous at Poole, “but now, 1830, much more scarce.”
Although Black Labradors are now really numerous, few strains can be actually traced back to the original imported dogs.
The Buccleuch Labradors all trace back to Lord Malmesbury’s importations ; and, through the Duke of Hamilton’s “Sam” 1884 and Sir Frederick Graham’s “Kielder,” they also trace back to the 5th Duke of Buccleuch’s importations, which included “Brandy,” “Moss,” “Drake” 1840, “Nell” 1848 and, “Jock,” “Drake” and “Nell,” belonging to the 11th Earl of Home.
There are also some tracing back to the Labradors of Sir Frederick Graham and Lord Wimborne. Those above mentioned were said to be bigger and coarser than those belonging to Lord Malmesbury, which were small, compact and very active; their coats were short, thick and smooth, with sometimes a brown tinge at certain seasons. The eyes of most were in colour something like burnt sugar. Their heads, which were not big, were broad in the skull, shapely and not long in the muzzle. Their bright counte­nances denoted their sweet tempers and high courage. This type is still maintained in the Buccleuch Kennel.
Between 1865 and 1875, Lord Malmesbury, Mr C. J. Radclyffo (of Hyde, Wareham), Mr Montague Guest and Lord Wimborne bought a lot of dogs imported by Hawker, the owner of a trading schooner which plied between Newfoundland and Poole.
A good many years later, one of Mr Radclyffe’s black Labrador bitches had two yellow whelps, whence the yellow breed of Labra­dors originated.
Formerly, a whelp in the Vuccleuch Kennels was occasionally born liver-coloured, but this was rare, and has not happened for many years.

At the end of the nineteenth century Labradors were scarce in this country, whereas now they comprise the majority of retrievers.
It appears that if a Labrador is crossed with some other strain, the Labrador type nearly always predominates.
These notes, although alluding to earlier Labradors, are meant to refer only to the Duke of Buccleuch’s Kennel since 1882.
The 6th Duke of Buccleuch and 12th Earl of Home spent some winters at Bournemouth in the early eighties, and were amazed, when shooting at Heron Court, at the work of Lord Malmesbury’s dogs, especially in water. Lord Malmesbury gave them some of his breed.
When “Ned,” 1882, arrived at Langholm Lodge, he proved himself of a different category to any of the other dogs there, whereas “Avon,” 1885, was even better than “Ned.” All the Buccleuch breed trace back to these two dogs.
In consequence of their excellence, the 6th Duke of Buccleuch gradually established Labradors on all his Estates, and eventually maintained a Kennel of 30 to 40. couples. No whelps in those days were ever sold. Some were regularly given to various friends and relations, but, with the exception of the Duke of Portland’s and Hon. A. Holland Hibbert’s, there has been no systematic main­tenance of the breed in any other Kennel.
The present Duke of Buccleuch maintains a Kennel of the same dimensions as his father.
Of the out crosses, “Sailor” 1892, bred by the late Earl of Vern-lam from the Netherby strain, is mentioned, but none of his blood is to be found in this Kennel to-day, except through Peter of Faskally.
The Hon. D. H. Cairns had “Hero” on approval. Being con­vinced he was from Newfoundland, he bought him. Whilst show­ing the instincts of a retriever, he was obviously untrained. Some of his teeth were worn flat, probably by carrying hard substances. His under coat was dense; and he revelled in water. He must have been over six years of age ; and looked rather coarser than the Buccleuch Labradors. His descendants were excellent.
In August 1908, Mr W. Steuart Menzies of Culdares saw what he was sure was a Labrador on the quay at Trondhjem, in Norway. He was told that the mother had been brought over from America in whelp. He bought the dog, who was named “Stranger.” At home he was called “Bob.” He was rather rough in the coat, had a wonderful nose, but did not retrieve, standing over a bird until it was picked up.
The entries show that care has been taken to keep the imported blood uncontaminated.
The Appendix contains the Pedigrees of the Duke of Hamilton’s “Sam” 1884, “Buccleuch Sailor” 1892, “Netherby Tar” 1894, Mr A. Craw’s “Nell” 1896, Hon. D. H. Cairns’ “Smut” and Mr Bar­nett’s “Squib” 1896, the Duke of Portland’s “Bess” 1899, “Munden Sentry” 1900, “Peter of Faskally” 1908, Mr R. Howard’s “Tinker” 1914, “Banchory Rando” 1919. It has not been found possible to trace all the outside pedigrees back throughout to the original im­ported dogs. Three Pedigrees typical of the Buccleuch Kennel are also given, namely, “Alma” 1923, “Daniel” 1926, and “Flax” 1927. Unless otherwise mentioned, all names are Buccleuch.
Photographs are also shown of the Buccleuch dogs, “Avon” 1885, in his extreme old age; “Guy” 1902, when 9 years old; and “Daniel” 1926.
To distinguish dogs from bitches the names of the latter are printed a little to the right.
It is hoped that this book may be of interest to lovers of Labradors by showing the origin of practically all the Labradors now in this country, exclusive of the Yellow Strain.
G. W. S.

We use cookies on our website to give you the most relevant experience by remembering your preferences and repeat visits. By clicking “Accept All”, you consent to the use of ALL the cookies. However, you may visit "Cookie Settings" to provide a controlled consent.
Cookie SettingsAccept All
Manage consent

This website uses cookies to improve your experience while you navigate through the website. Out of these, the cookies that are categorized as necessary are stored on your browser as they are essential for the working of basic functionalities of the website. We also use third-party cookies that help us analyze and understand how you use this website. These cookies will be stored in your browser only with your consent. You also have the option to opt-out of these cookies. But opting out of some of these cookies may affect your browsing experience.
Necessary Sempre abilitato
Necessary cookies are absolutely essential for the website to function properly. These cookies ensure basic functionalities and security features of the website, anonymously.
Functional
Functional cookies help to perform certain functionalities like sharing the content of the website on social media platforms, collect feedbacks, and other third-party features.
Performance
Performance cookies are used to understand and analyze the key performance indexes of the website which helps in delivering a better user experience for the visitors.
Analytics
Analytical cookies are used to understand how visitors interact with the website. These cookies help provide information on metrics the number of visitors, bounce rate, traffic source, etc.
Advertisement
Advertisement cookies are used to provide visitors with relevant ads and marketing campaigns. These cookies track visitors across websites and collect information to provide customized ads.
Others
Other uncategorized cookies are those that are being analyzed and have not been classified into a category as yet.
ACCETTA E SALVA